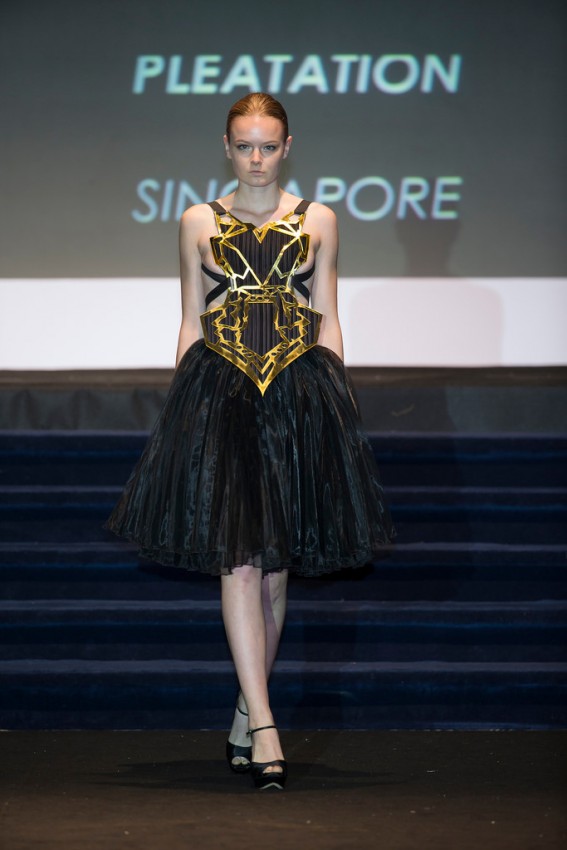 Singapore – To say that it was a golden opportunity for PLEATATION to be invited to feature at the highly anticipated Mercedes-Benz STYLO Asia Fashion Week 2014 in Malaysia would be an understatement. It was in fact a double blessing for Raffles Fashion Designer Chiang Xiaojun as this invitation came on the right time for her to launch her latest label ‘PLEATATION PLATINUM’.

PLEATATION PLATINUM is the bespoke label of PLEATATION, holding the same concept of being entirely pleated in intricate and detailed styles. When her collection ‘Anarchia’ hit the runway at Mercedes-Benz STYLO Asia Fashion Week, the audience was stoked at the intensity of her designs.

“Anarchia collection marries the idea of a darker inner self to an opposite surface, the collision of the light and dark, focusing on cut-outs and translucencies, bringing together two opposites that formed a beautiful silhouette.” said Xiaojun.

Emotions was running high as Xiaojun saw her collection on the runway, ending the entire event with magnitude and style. “It felt really overwhelming and was heartening to receive acknowledgement from the event. This show has brought both PLEATATION and PLEATATION PLATINUM to another level, exposing the labels to an international level and reaching out to greater awareness.” commented Xiaojun.

THE F THING FOR COCHELLA